Beyond polemics and aesthetic labels, tango music finished its first cycle, characterized by a profound stylistic and aesthetic evolution. That's how a figure like Astor Piazzolla appears as one of the last extensions of a tradition and savoir-faire often orally passed on, a way of playing music that directly goes back to the beginning of the twentieth century. On the eve of the twenty first century we can feel a wind of renaissance, a fizzing stirring up the already universal world of tango.

Each new generation is of course tempted to situate itself -whether it is in rupture or in continuation- in comparison with its elders. We probably lack the distance and the lucidity to understand its full scale, but we are the curious witnesses and the determined actors of a new cycle, committed musicians in a complicated age filled with incredible germination that will only clearly arise many years from now. For it is now that the new musical ideas of this strange and unpredictable era are being forged.  It is the Tango Today. Tango Hoy.

Juanjo Mosalini and Leonardo Teruggi embody this quest. They learned with the grand Maestros who transmitted them this vast living legacy, they are themselves recognized actors of the European tango avant-garde. Bearers of a double culture from both hemispheres, heads and tails of the same curiosity and the same musical highest standards; Tango is their mother tongue, the way they explore and write every day.

Following the tradition of reinterpretation of the classics of the repertoire, their arrangements are actual re-compositions, prisms where the echoes of the past become the sound matter of a reinvented present. As for their original compositions, they open into a new world where the concepts of rhythm, articulation, texture and form expand, for these artists use all their interpretative and writing resources to create their own musical imprint. 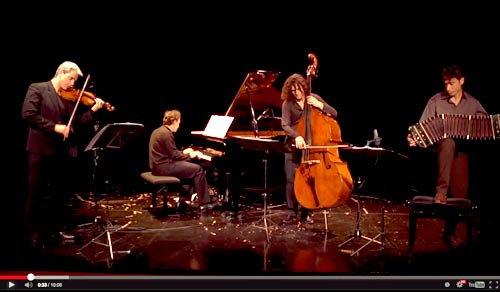